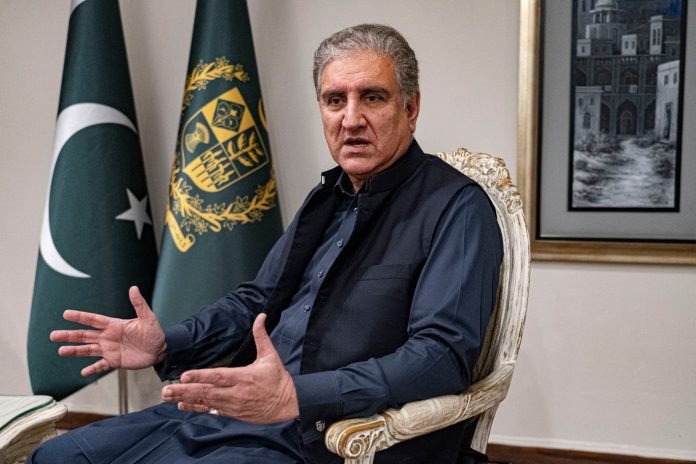 ISLAMABAD: Foreign Minister Makhdoom Shah Mahmood Qureshi on Monday said Pakistan had achieved historic milestones at the diplomatic fronts through a robust economic, public and science diplomacy.
Addressing a presser to highlight last year’s achievements, the foreign minister termed the previous year significant one as Pakistan had proactively and consistently advanced its diplomatic objectives on a range of diplomatic fronts, both bilaterally and multilaterally.
He said besides consolidating friendships, Pakistan strengthened its bilateral ties with the major powers and key partners across the globe. “Under the leadership of Prime Minister Imran Khan, Pakistan continues to be a leading voice at the world fora, with strong advocacy on issues of sustainable and equitable development, climate change, debt relief for the developing countries, corruption, illicit financial flows and Islamophobia,” he added. The foreign minister said a major shift in the foreign policy was achieved through increased focus on geo-economics leveraging its geo-political significance.
Indian Prime Minister Narendra Modi can participate in the Saarc Conference virtually if he cannot come to Pakistan, he said, adding, “We will settle the issue of border fencing with Afghanistan through diplomatic channel.”
Qureshi further highlighted that in 2021, about 85 bilateral exchanges with over 50 countries and 35 senior leadership visits to Pakistan had taken place. Besides over 50 high-level multilateral engagements, participation at 35 international forums and 32 senior leadership visits by Pakistan were recorded during the previous years, he added.
The foreign minister further said five Pakistan’s sponsored/cosponsored resolutions were adopted by the United Nations. A total of 114 Pakistan missions were made to function online through three popular social media platforms, he added.
Qureshi also mentioned success through geo-economics policy with focus on export and investment promotion, increasing investors confidence, enhancing remittance inflows, tourism promotion, and broadening of trade ties with host countries.
This led to an improvement by 39 points in Pakistan’s ranking in ease of doing business, 7pc increase in trade with Africa, improvement by 59 points in Pakistan’s Business Confidence Ranking, USD 2.9 billion deposited in 299,000 accounts across 175 countries in Roshan Digital Accounts, USD 2 billion invested in Naya Pakistan certificates, 24.1pc increase in home remittances to a record high of USD 18.7 billion (during eight months of FY 2020-21), and an increase of over USD 2 billion in the export of information technology and information technology-enabled sectors.
The foreign minister said Pakistan and Saudi Arabia had signed seven MoUs/agreements, including the Memorandum of Understanding (MoU), to operationalise Saudi-Pakistan Supreme Coordination Council (SPSCC).
Pakistan’s exports to and remittances from Saudi Arabia and the United Arab Emirates grew, and a record number of manpower was exported to Qatar in 2021. Kuwait, he added, eased visa restrictions for Pakistani nationals, and under the bilateral agreement on recruitment of healthcare professionals, around 1,800 personnel from Pakistan had already reached Kuwait.
About ties with China, he said 2021 marked an important milestone in Pak-China friendship, as the two countries celebrated the 70th anniversary of the establishment of diplomatic relations in a befitting manner with over 140 events and activities held across Pakistan and China.
“These events reinvigorated the sentiments of bilateral ties, reaffirmed our determination to strengthen all-weather strategic cooperative partnership, continue our joint efforts for the high quality development of CPEC (China Pakistan Economic Corridor) and further elevate Pakistan-China friendship to a new pedestal of bilateral cooperation, as envisaged by the leadership and peoples of the two countries,” he added.
The foreign minister further elaborated that Pakistan’s exports to China during the first 10 months of 2021 were recorded at US$2.85 billion (growth of 77pc year-on-year). China remained the largest source of net FDI (foreign direct investment) to Pakistan, he added.